On 11th April 2019 SAND attended the AgeUK Shropshire Telford & Wrekin annual conference and gave a presentation on the conflation of Sex and Sexuality – and the implications of this for older and old LGBT people. The presentation was entitled “It Ain’t Necessarily So”

“Nobody could have been more surprised than us when 3000 people sang with Tom Robinson at Shrewsbury Folk Festival that they were glad to be gay!

This was in stark contrast to when he wrote the song in 1976 when he was the first to really stand up publicly to sing about the oppression of gay people in the UK, including the hypocrisy of Gay News being prosecuted for obscenity whilst Play Boy depicting topless women was fine. The song was a huge success on its release but the BBC refused to broadcast it on the radio due to the ‘controversial theme’.

We chose this clip to contextualise our history as Lesbian, Gay, Bisexual and Trans people – people who have been criminalised, who only last week heard stories from around the world of laws to stone them to death, people have experienced hatred, violence and state sanctioned prejudice and discrimination.

We chose the title of our presentation It ain’t necessarily so to encourage you to sing – if only in your head – to keep at the forefront of our minds that people are not always a culmination of the assumptions that we make about them.

We are from SAND – Safe Ageing No Discrimination – a Shropshire-based organisation which has a focus on campaigning for the rights of older and old Lesbian, Gay, Bisexual and Trans people – particularly in the fields of health and social care. We set up formally in 2013 in response to research illustrating the incidence of, once confident LGBT people going back into the closet as they aged because of their fear of returning prejudice and discrimination.

SEX – SLIDE 2
“It’s a minefield! Trying to untangle this, someone recently said:

SEXUAL ORIENTATION/IDENTITY: Refers to who you are emotionally, romantically and/or sexually attracted to – who you want to be intimate with

SEXUALITY: May encompass sexual orientation but may be expressed in lots of different ways including thoughts, fantasies, desires, beliefs, practices, roles etc

GENDER: Socially defined roles and behaviours – based on cultural rules about how males/females are supposed to behave

GENDER IDENTITY: As defined by the Human Rights Commission – your innermost concept of self as male, female, a blend of both or neither – how we perceive ourselves and what we call ourselves – no matter what we might ‘look like’ to others It might be the same as the gender you were assigned at birth and it may be different – many would argue that there are dozens of genders that people might identify with and indeed in some cultures this is recognised.

Increasingly people are questioning the assumption of gender binary (male/female) and heterosexual ‘normal’ – you might think this is a good thing or you might find it a bit challenging – whatever, it’s likely that it’s always been the case, even if not acceptable for all sorts of reasons which we haven’t time to explore!

The photo on the slide is from the British Museum Pride Festival in 2013: https://www.theguardian.com/culture/2013/jun/20/british-museum-gay-love-secrets

It portrays the marble busts of Emperor Hadrian and his beloved Antinous, represented as a young god crowned in ivy – illustrating that this stuff has been going on from time immemorial.

“This has been the hardest thing that SAND has had to face in our first 5 years of operation – getting people to recognise that we exist and that because of the history of prejudice and discrimination in all it’s manifestations – losing jobs, children family – being abused, being secretive……many LGBT people have learned to hide to survive”.

[We then read an excerpt from Jane Traies Chapter [p67-68] in Lesbian, Gay, Bisexual & Transgender Ageing: Biographical Approaches for Inclusive Care Support] which reflects on the three-fold invisibility of lesbians].

We don’t need to be able to see them – unless we don’t believe they are there.

Do they have specific needs? We don’t know if we don’t acknowledge they even exist.

Many researchers have used the term ‘body work’ to highlight an aspect of personal care that is fraught with difficulty and fear from many LGBT people – who say things like “other people may fear touching me, may think I fancy them – I don’t want anyone to see my body as I haven’t physically transitioned”. There are lots of very real issues here.

When talking to service providers about how they respond to LGBT people and ascertain their concerns and needs, they have said things like:

Reflecting back on the importance of historical experiences, and how these can impact on people’s identity, this news article is as recent as January 2017.

The general pardon is based on the 2013 royal pardon granted to Alan Turing, the mathematician who broke the German Enigma codes during the second world war. He killed himself in 1954, at the age of 41, after his conviction for gross indecency, having accepted chemical castration as an alternative to prison. Campaigners highlight that a ‘pardon’ suggests there was wrong-doing and an apology would be more appropriate.

Turing’s experience is not unique – there will be older gay men who have had similar experiences of prison and ‘treatment, who may have been harassed by the police, criminalised, been given electric shock treatment and had ‘aversion therapy’. We also know people who have had carers coming into their homes and praying for their sins – this is happening now!”

“Another news article.
Six weeks ago, we were hosts of an amazing workshop that took place in Shrewsbury which was about LGBT Asylum Seekers as part of Shropshire LGBT History Month, where we had invited LGBT Asylum Seekers to come to Shrewsbury to listen to a talk by Clare Summerskill and then take part in a discussion. On the morning of that workshop, we opened the newspaper and found this headline about a man in danger of deportation because the authorities do not believe he is gay – because he does not have a boyfriend. In order to determine if people are gay or not the authorities ask them about the opening times and locations of gay nightclubs, for example! This is almost exactly the very same experience of the LGBT Asylum Seekers who came to our event and is well documented.

The man in this news article is based in Liverpool. Kieran Bohan, a chaplain at the Liverpool YMCA said: “it is a western cultural assumption that you have to be sexually active in order to have a healthy sexuality. They couldn’t get away with saying to a 76-year-old heterosexual that you can’t be heterosexual because you don’t have a partner. It’s absurd and unjust.”

“Another recent headline. This is an extreme and does sound particularly bizarre – illustrating some contradictions and absurdities

[the small type taken from the article reads: However, a person can be convicted of having gay sex only if there are multiple Muslim witnesses.”]

Presumably you can be homosexual but will only be convicted if you are seen to have gay sex by a number of people! This surely illustrates why so many people are hidden!

This is  extreme and scary but we can also flag up the more ‘normalised’ and regular homophobia that populates our lives and which affects how we feel able to be in the world – inevitably impacting on our mental health, our relationships – both sexual and non-sexual.

Examples range from: anti-gay jokes and innuendo; Hate crime – which still very high and bullying that we know is still a real issue; religions of all persuasions telling us that we are abnormal, that we are wrong, that we shouldn’t exist, that we can change.

Gay men and the AIDs crisis forced many to experience extreme hate and homophobia from governments as well as ordinary citizens – as well as watch their friends and loved ones die.

Governments legislating against us (as well as for us) Section 28, enacted in 1988, and only repealed in 2003 stated that a local authority “shall not intentionally promote homosexuality or publish material with the intention of promoting homosexuality” or “promote the teaching in any maintained school of the acceptability of homosexuality as a pretended family relationship. This had a massive impact and created a huge climate of fear amongst teachers, gay teachers, young people struggling with their identity.”

Civil partnership and gay marriage parliamentary debates – we’ve got them but still have to listen to masses of hate and vitriol.

Someone recently asked of Question Time – Is it morally right to teach kids LGBT issues?  As someone asked – does this imply that our existence is up for debate? It has unleashed a whole series of arguments about the BBC and neutrality v sanctioning prejudice and we imagine the debate will go on! There is protest and lots of  argument but whatever….in the end here are still LGBT people sitting at home feeling a little bit unnerved!

This is fairly sobering – has anyone been on holiday to any of these places? I have. It makes me feel a bit uncomfortable.

And if we replaced the word ‘homosexuality’ for ‘heterosexuality’ on this slide, it would be blank!

“So – on to happier pictures! We asked some friends if they would mind sharing pictures of themselves so that we could present some real LGBT people!” [at this point we showed a series of photographs, including one of Luchia and Angela, who we met a couple of months ago at a film screening of Invisible Women  shown as part of Shropshire LGBT History month with guest speaker Frankie Green.

We shared a lovely video clip of Luchia and Angela on vocals and Frankie on drums – reunited in music at The Hive, filmed only a few weeks ago – to bring our presentation to an uplifting close!

Thanks to the organisers for inviting SAND to take part. 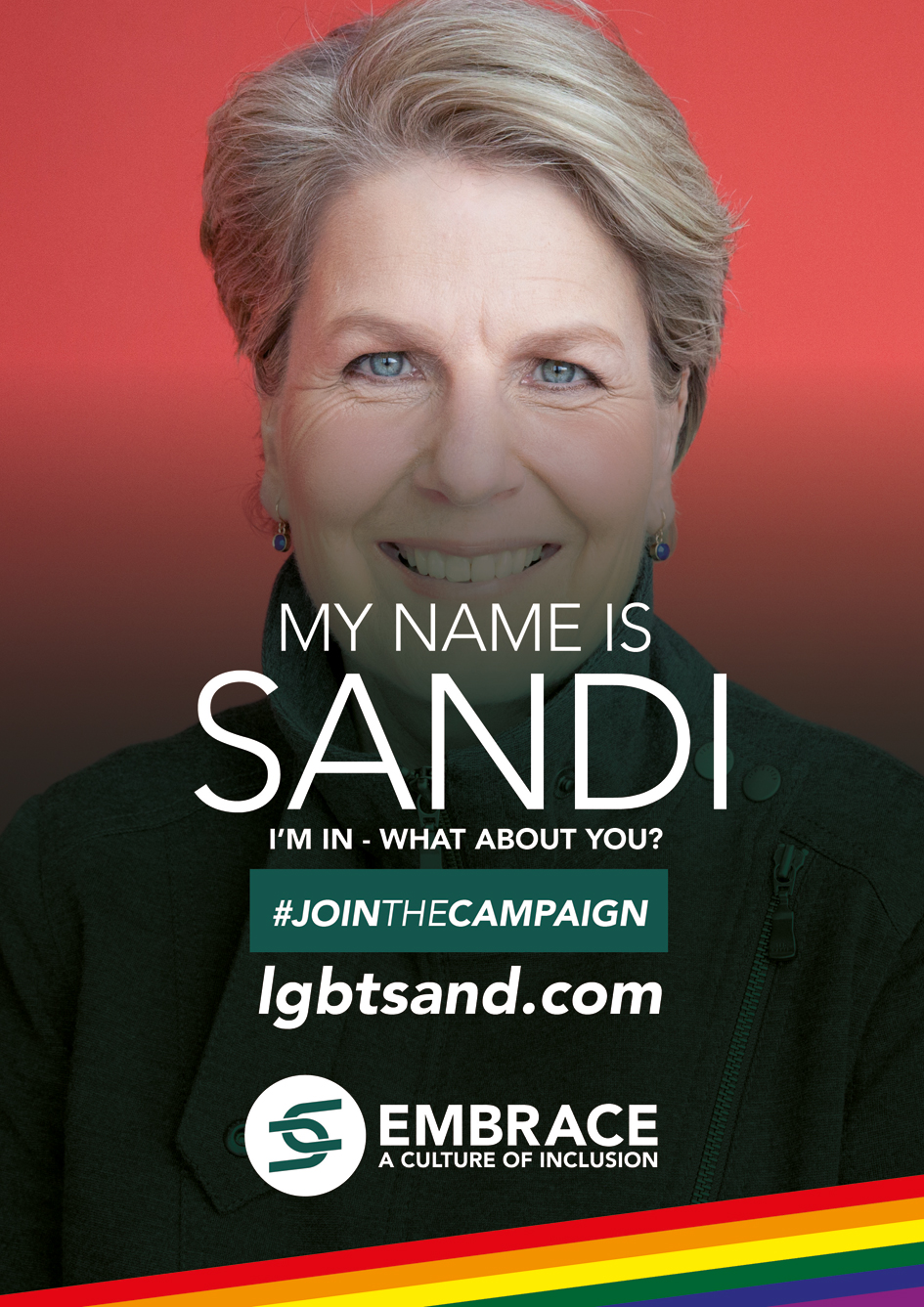 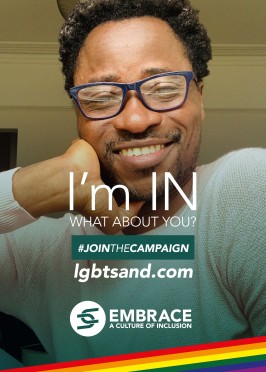 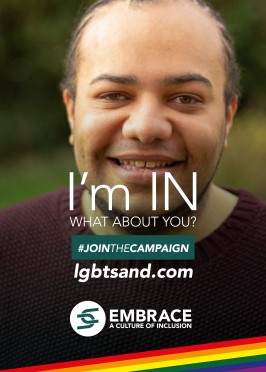 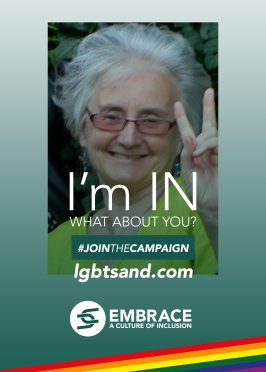 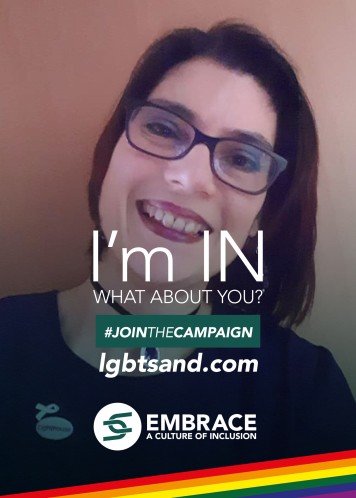 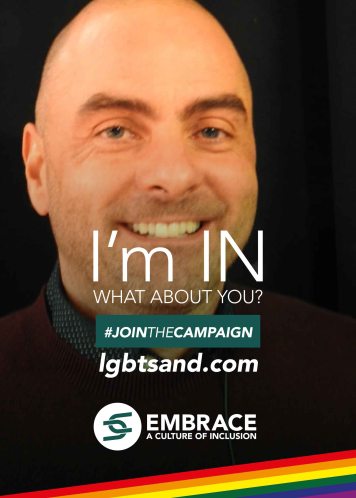